Life as a Fit Mom 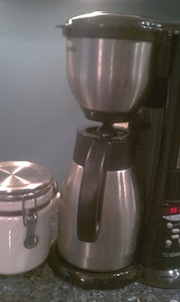 A while back I posted on Facebook that I wish I was the type of person who set up the coffee maker at night. I am an early riser and love the idea of pouring a cup of coffee immediately after walking downstairs to the kitchen. Instead I often had to go through the motions of dumping the previous day’s coffee grinds, refilling the filter with fresh coffee, measuring the right amount of water, waiting for the coffee to brew. Time I could be sleeping. Or doing sun salutations. Or getting a start on my writing for the day. This kind of person, who took the time to plan ahead, to set up the coffee before going to bed would then have that early morning gratification.

I was fumbling through my morning coffee prep, although wishing I wasn’t, because I was just so worn out at night I couldn’t do one more thing. But after that Facebook post, I wondered: Why not become that type of person who sets up the coffee maker the night before? I could become that person. I just needed to decide to be that person.

I recently read a quote that said, “Nothing changes until it becomes what it is.”

Becoming what is the person who prepares the coffee maker the day before wasn’t so hard after I realized I didn’t have to make the coffee at night when I was already spent and looking for ways to cut corners. The secret was to set up the coffee maker early in the day--be it while cleaning up the breakfast mess or while talking to my kids while they were eating their afternoon snack. I had just been so stuck on thinking there was only that one way to go about it. Discovering this simple solution made the change realistic and lasting.

While this one small change in my life didn’t effect the grand scheme of the universe, it made me feel so good and empowered about my life.

I had to wonder then, what else? What else could I decide to be?

What have you decided to be?